The Solemate Mini is a durable unit with a sturdy rubber base that grips the table well to avoid movement, so don’t even think of buying two and racing them. It measures 12.4x5.3x5.8cm (length, width, height), and is small enough to fit into a large pocket or small bag.

The Solemate Mini has a compact design, with speakers on one side of the unit. The other houses a passive radiator that improves the bass output. On the top of the box there are three buttons, two for volume, and one for pairing. The pairing button can also be used for activating Siri on your iPhone.

The advantage of the size is portability, and the dual direction of the sound output means that it provides relatively balanced audio. A stereo cord is supplied that that allows the speaker to also be used with any non-Bluetooth devices, and the fact that it clips conveniently into the base of the unit means that you don’t need to remember to take it with you if a friend wants to plug in their device — just turn the speaker upside-down and the cord will be there.

We tested the unit with an iPhone 4s, an HTC Sensation XE, a Samsung Galaxy Tab 7 and a MacBook Air. The results were consistent across all devices, with pairing via Bluetooth being an easy three-step process.

The Bluetooth pairing is very simple. Just turn on Bluetooth on your device, hit the middle button on top of the Jabra, connect, and you’re away. NFC can also be used to pair the device. For devices that don’t have Bluetooth, then the provided cord that we mentioned earlier will come in handy. 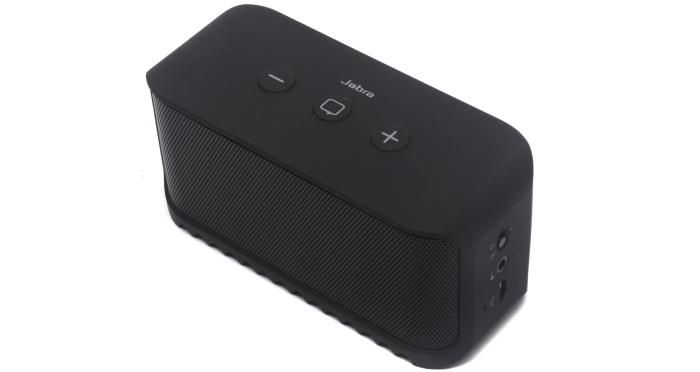 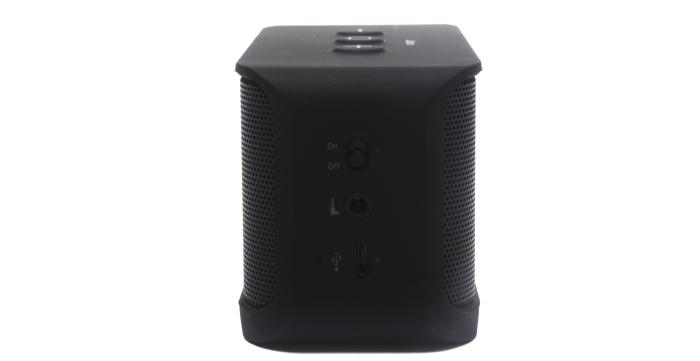 We were able to get around seven and a half hours of continuous playback from the unit, which is pretty close to the eight hours claimed by Jabra. Seven and a half hours is still a considerable amount of time, and plenty for a small gathering where background music is all you want.

While it’s difficult to test the validity of Jabra’s claim of three months standby battery life, we were able to go one week between uses and the battery still held plenty of charge. Devices such as this are rarely used continuously over a prolonged period, so it’s nice to know that you can put it away and have some battery life the next time you use it. To charge it from empty only took about two hours.

The sound quality is good in an indoor environment or in fairly close proximity while outdoors. We were able to clearly hear audio in the next room inside an apartment. As long as the volume is not pushed above about 80 per cent, the clarity is good. We don’t recommend the Jabra if you are an audio purist, but suspect you will be looking at higher priced units if you are.

In Outdoor environments the sound dissipates considerably beyond about 10m. If there is any ambient noise about, audio can get lost in the ether. Sitting around a table with a group of friends, there is no problem hearing audio over normal conversation.

The balance in the Solemate Mini is nice in terms of bass versus mid- and high-range frequencies. As we mentioned, above eighty per cent volume or so there is considerable distortion, especially at the low end. This results in some serious rumble and vibration from the unit that makes some bass-heavy music particularly hard to hear. Unless you are planning a speaker war with a friend and aren’t looking for high-end sound quality, you should have no problems with performance.

We have a 30-day return policy, which means you have 30 days after receiving your item to request a return.

To be eligible for a return, your item must be in the same condition that you received it, unworn or unused, with tags, and in its original packaging. You’ll also need the receipt or proof of purchase.

To start a return, you can contact us at sales@mobilebarn.com.au. If your return is accepted, we’ll send you a return shipping label, as well as instructions on how and where to send your package. Items sent back to us without first requesting a return will not be accepted.

You can always contact us for any return question at sales@mobilebarn.com.au.


Damages and issues
Please inspect your order upon reception and contact us immediately if the item is defective, damaged or if you receive the wrong item, so that we can evaluate the issue and make it right.


Exceptions / non-returnable items
Certain types of items cannot be returned, like perishable goods (such as food, flowers, or plants), custom products (such as special orders or personalized items), and personal care goods (such as beauty products). We also do not accept returns for hazardous materials, flammable liquids, or gases. Please get in touch if you have questions or concerns about your specific item.


Exchanges
The fastest way to ensure you get what you want is to return the item you have, and once the return is accepted, make a separate purchase for the new item.


Refunds
We will notify you once we’ve received and inspected your return, and let you know if the refund was approved or not. If approved, you’ll be automatically refunded on your original payment method. Please remember it can take some time for your bank or credit card company to process and post the refund too.

Orders ready for pickup in 2 hours